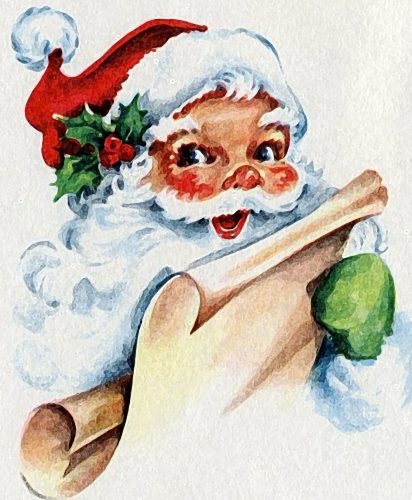 Thanksgiving has come and gone, and the madness of Black Friday has passed. We hope you all made it out of the mall with all of your limbs intact. By the time you read this article, there will only be about 30 shopping days left before Christmas. Jack keeps getting older, fatter, and grayer in the beard every day, making him more and more Santa-like with every passing moment. As such, we have decided that we are now the utmost authorities on who is to be labeled as “naughty” or “nice” in the borough, just in case you needed to know for your last minute shopping. That having been said, here is our Marietta Nice List:

New Local Business Owners – You all either started a new business in a time where building a brand and staying afloat was a major challenge, or if you’ve been around for a couple years, you made it through Covid lockdowns, unscathed, and we are proud of you. Your commitment to the local community has been a boon to Marietta’s economy, so we tip our hats to you.

The Ulrichs – They run an ice cream shop. What more can we say? Well, lots as it turns out. Their repurposing of the First National Bank building on West Market Street, and their forays into new ventures such as borough beautification projects and unification of local businesses, have helped Marietta tremendously. Santa says you guys can have whatever you want for Christmas.

The Mayor – Our new Mayor, Rebecca Carroll-Baltozer, has landed into her new position completely in stride, and has taken the reins of the local government. Everyone says, “I could be mayor,” but she actually did it. With a younger view and a fresh approach to constantly evolving issues that the borough must face, we know she will be successful, and we wish her well in the new year and the years to come.

Bob & Wendy Shank – Their constant positivity, their love of Marietta and everyone in it, and their never-ending smiles create a bright spot around them that follows them everywhere they go. Plus, they sell booze. This earns the Shanks a permanent spot on Santa’s nice list.

Marietta Non-Profit Organizations & Volunteers – Marietta Pioneer Fire Company, Marietta Special Fire Police, Marietta Area Business Association, Marietta Restoration Associates, and The American Legion Riders, just to name a few, have donated tens of thousands of dollars and hundreds of thousands of volunteer man-hours to making our local area a better place for everyone. Thank you to all who have helped with these and other organizations over the years.

Adam Jenkins – The president of MRA, who makes this publication, as well as the Christmas Candle Light Tour possible. You’ve been a stalwart leader, a wonderful organizational partner, and work hubby to Mrs. Claus (Trisha). The MRA looked like it had dark days ahead a few years ago with the pandemic and Tour cancellation, but your leadership and positive attitude have helped us pull through. Also, thanks to your better half (Rebecca) for handling the advertisements for the Traveler, since none of the rest of us wanted to.

Whew! That’s a pretty good nice list. But of course, Santa giveth, and Santa taketh away. Who has made the naughty list this year? Well, read on and find out.

Dunkin’ Donuts – Listen, we don’t actually have a problem with Dunkin’. But if we had to see one more “Is Dunkin’ open yet?” post on the Marietta Facebook page, we were going to burn it to the ground. Two lumps of coal.
Marietta Memes – Speaking of Facebook, some of you may not be familiar with this Facebook page, but it was around for a couple years, mercilessly making fun of the Marietta lifestyle. Those of us who knew about it loved it, as it was a wonderful satirical look at rural life. However, one of the admins got banned from Facebook, and the other decided to procreate and now has no time to run the page. Unforgivable. Three lumps of coal.
Steve Bailey – Steve is the chief of the Marietta Special Fire Police. We actually love Steve, and he was already included in the nice list, under volunteers. We just want to see if he’s reading this. Plus, he closed a road and made Jack late for work once. One lump of coal.
The Vultures – Or, as we call them at our house, Marietta pigeons. One cubic yard of coal.
Non-Parkers – What is a non-parker, you might ask? Well, that’s a person who decides to just stop on the road and put their four-ways on so they can have a conversation with someone on the sidewalk, rather than just pulling into the open parking spot right in front of them. You know who you are. Ten lumps of coal.
Train Complainers – You chose to live 200 yards or less from a freight railroad track. You knew what you were getting into, now live with it. Five lumps of coal.
Columbia Water & Republic Services – One destroys all our roads, and the other destroys all our trash cans, if they even bother to show up, that is.. 25 lumps of coal, each.
Taylor Swift – Just who do you think you are? Releasing an entire album as singles and hogging up the entire Billboard top 10? That must have been one devastating break-up for you to be that inspired. Shut up. No offense to any Taylor Swift fans, but somebody had to say something. An entire truckload of coal.

Well folks, there you have it. This is the definitive naughty and nice list for the borough this year. If you didn’t see yourself on either list, no worries, Santa will still be able to visit you this Christmas.
“Peace on Earth will come to stay, when we live Christmas every day.”
– Helen Steiner Rice