Spring is in full effect, and for many people, that means it’s time to dust off the old iron horse, crank up the motor, and go for a ride. Some people ride motorcycles for fun and recreation. Others find it to be therapeutic, relaxing the body and clearing the mind. A few people, however, also choose to ride for a cause.

You’ve probably seen us, gathering in the parking lot of the American Legion or at Rutter’s, early on a weekend morning, wearing black vests covered in patches emblazoned on the back with our bald eagle emblem. We are the American Legion Riders, and as it says in our creed; “For God, for Country, for our freedom, for those who serve, for those who have served, for POWs and MIAs, for their families and ours, for our community, we ride for all.” 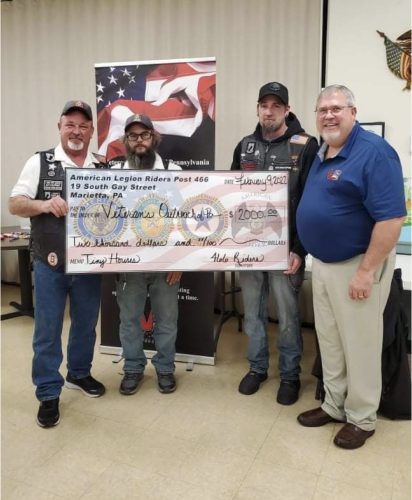 First, a little background information. The American Legion Riders are a nonprofit volunteer organization, and a part of the American Legion family of organizations. The American Legion was founded in Paris, France on March 15, 1919, as a patriotic veteran’s organization with a focus on service to not only WWI veterans, but also service members and local communities. The first chapter on American soil was chartered three months later in Tulsa, Oklahoma. Over the years it has evolved into one of the largest and most influential nonprofit groups in the United States.

The American Legion Riders (ALR), on the other hand, is a much younger organization. The first ALR chapter was established at American Legion Post 396 in Garden City, Michigan in 1993, when Chuck “Tramp” Dare and Bill “Polka” Kaledas thought it would be a good idea to start a motorcycle enthusiast association within the organization. Although the ALR has only been around for 29 years and started with only 19 founding members, it has exploded into over 110,000 riders at more than 2,000 chapters nationwide, and in at least three foreign countries.

The ALR is a charity organization, raising hundreds of thousands of dollars for children’s hospitals, schools, veteran’s homes, wounded service members, educational scholarships, and dozens of other worthy causes. Here at Marietta Post 466, we’ve raised funds for not only national veterans’ charities, but our riders have also ridden to support organizations such as the Lebanon VA Hospital, Penn State Health Children’s Hospital in Hershey, the Harrisburg Veterans of PA Tiny Homes Project, Building Bridges Foundation, Mobile Veterans Outreach Vans, Pets for Vets, and many other community-oriented charities. Every dollar of profit from every ride and fundraiser goes directly to the beneficiary that has been selected for that particular event.

Speaking of fundraisers, you’ve no doubt seen us doing plenty of that around the town. From breakfast events, to spaghetti dinners, from our chicken barbecues, to our “world-famous” hot dog stand at Marietta Day, where you probably saw me dancing around like an idiot in a giant hot dog costume. The point is, we do it all, from riding, to wearing silly outfits, to giving each other nicknames (which the keen-eyed reader may notice we included in the author’s names) for these well-deserving charities, who would find it hard to keep going without the financial aid of charitable donations from organizations like the ALR.

You may be thinking to yourself, “Self, I’d like to help out with this organization.” Well, I have good news. You can. If you walk by our giant star-spangled tent at Marietta day, buy a hot dog. You just helped. When you see us out on Route 441 selling barbecued chicken, stop in and buy one. You just helped. If you see us advertising a breakfast or dinner fundraiser, come to the American Legion and fill your belly. You just helped.

If on the other hand, you yourself are a rider, then we invite you to come and see what it’s all about at one of our rides. Some riding clubs are very picky about who they allow to ride with them, but not the American Legion Riders. That’s because the ALR isn’t a motorcycle club. It’s a place for everyone, and it is a group of individuals who all feel a commitment to bettering their communities and the lives of others, and because of that, nobody who wants to help us will be turned away. From our fundraising rides, to larger multi-organization rides, all the way down to us escorting the annual Marietta & Bainbridge Memorial Day Parades, all riders are welcome to join us.

Here’s a sneak peek at what the Post 466 American Legion Riders have scheduled for the rest of the year, so far:

All rides begin registration in the American Legion Post 466 parking lot at 10 a.m., with kickstands up at noon. All rides cost $10 per rider and $5 per passenger.
All breakfast & dinner events are open to the public; no American Legion membership required.

So, if you see us out and about, fundraising, riding, or just stopping at the gas station to refuel, don’t be afraid to come over and have a chat. We love it when people show interest in the American Legion Riders, and we love knowing that others have the same passion for making their communities a better place for everyone.

If you yourself are a rider who is looking to join a wonderful, community-oriented organization, or if you’re just looking for a great bunch of people to ride with, ask one of us how you can get started with your membership at the American Legion. We’re not hard to find, just look for the vests. And of course, if you’re already a Legionnaire, Women’s Auxiliary, or Sons of the American Legion member and you ride, then what are you waiting for? Get your ALR membership paperwork started already!

Normally, we would close an article by telling you to sit back, relax, and enjoy something. This time though, we think the best way to close this article is to use the words of someone who already said it better.

“It’s the ride of life, the journey from here to there, living and loving every moment like we have none to spare.”
-Jess “Chief” Brynjulson