Bees carry collected flower pollen back to the hive on hairy sacks on their rear legs called corbiculae. In the process, bees have become some of the most important pollinators on the planet, and that is an extremely good thing as pollination is essential to food production and life on the planet. Nearly one-third of our food supply depends on insect pollination, most of which is accomplished by bees. Seventy percent of all flowers depend on pollination by bees, hummingbirds, butterflies, moths, wasps, beetles, and in parts of the world, bats. 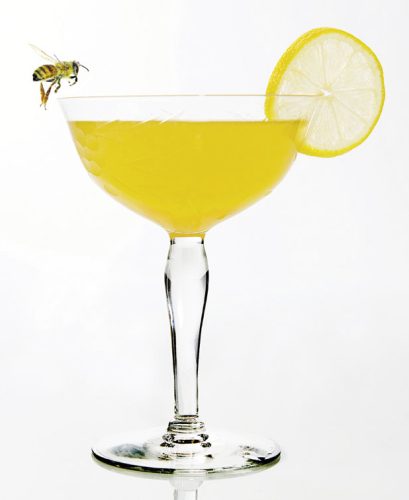 Late in the 18th century the idiom ‘the bee’s knees’ meant that something was small and insignificant, but by the Roaring 20s it meant a highly admired person or thing — similar to other nonsensical expressions of approval like ‘it’s the cat’s pajamas’ or “the cat’s whiskers”. According to Merriam-Webster the first recorded use of the phrase with this meaning was in 1921. That same year Frank Meier, the famous head bartender at the Café Parisienne of the Hotel Ritz Paris (and later celebrated WWII anti-Nazi spy), created an updated version of the Gin Sour cocktail using honey in the syrup instead of plain sugar calling it “The Bee’s Knees.” Reportedly, his recipe was popular here in the U.S.A. as it was better at hiding the flavor of substandard “bathtub” gin during the American Prohibition Period.

And now you know.

Here is a recipe for The Bee’s Knees cocktail.

Add the gin, lemon juice and honey syrup into a shaker with ice and shake until well-chilled. Strain into a chilled cocktail glass. Garnish with a lemon twist.

Some recommend using a traditional London Dry Gin (infused with juniper) or Hendricks (cucumber & rose) or a more modern citrusy gin. I used Market Alley Gin (citrus and botanicals) made by Thistle Finch in Lancaster, PA. A few folks also recommend infusing the syrup, or garnishing, with fresh thyme or lavender, but I am not one of them. However, everyone agrees that there is no need to wait until the official Pollinators Week in June to mix your own Bee’s Knees cocktail. Any time is a good time to celebrate pollinators. Cheers!

About the author: Mike and Jeanne Cassidy tend their pollinator friendly garden in Maytown.