Written by Trisha Ries
In an old historic town such as Marietta, it would almost seem inevitable that the spirits of those who have left the Earth still linger. I’m not talking about the ghosts of pub crawls past, but the spirit of those who once were. I was curious to find out more about what may haunt Marietta, so I reached out to some friends and did a little research and I am so glad that I did!
The saying goes “an apple a day keeps the doctor away,” but the Albatwitch might be at bay. While not in Marietta, this legend is not too far from our front door. The Albatwitch (means apple snitch) is a four foot creature much like a yeti that is said to live in the hills of Chiques Rock. Thought to be extinct, the most recent sighting was around 1970. The Albatwitch doesn’t have an insatiable thirst for blood, but for apples! The creature was said to come down from the trees, and steal apples from the local picnic goers. On occasion, the Albatwitch was known to throw the apples at the picnickers, too! Once a year, the Columbia Historic Preservation Society will hold an Albatwitch Day. This year it will be held Saturday October 9th from 11:00 A.M.-5:00 P.M. with haunted tours to follow at 7:00. Visit https://albatwitchday.com/ for more information. 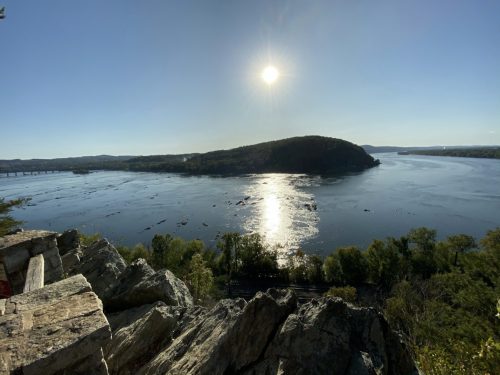 The Albatwitch isn’t the only thing that seems to haunt Chiques Rock. Chiques Rock is rumored to be haunted by a witch who was cast out of her home, and cursed the land making it uninhabitable for anyone else. When I first heard this story, I immediately thought of Nelly Nole; was it one in the same? A rumor spread in August of 1969 that a group of local boys actually spotted the tormented spirit in the hills. The rumor led to crowds gathering nightly at the old Chiques Park entrance, and on the night of August 24, 1969, a crowd of approximately 200 people gathered, and half the crowd claimed to have seen the apparition. The initial sighting was later found to be a hoax, but the crowds swore by what they saw.
Chiques Rock also has another name, one much more ominous- Lover’s Leap. The tale of Lover’s Leap has quite a few variations. The legend goes that a young Susquhannock Indian named Wanunga lived on the peak with his beautiful wife Wanhuita. Having left for battle, Wanunga traveled home to find his beloved in the arms of a white settler. In a fit of rage, Wanunga attacked the white man, and tossed him over the edge. Watching her lover perish, Wanhuita ran toward the cliff to stop her husband, and both fell arm in arm over the ledge. It is rumored that you can still hear the screams of Wanhuita to this day.
Making our way into Marietta, one can’t forget about our beloved 200 year old tavern. Shank’s has been a community staple since 1814 when Marietta was a boom town for the canal. One would assume that a place that old has some stories, and owner Bob Shank was eager to share. When Bob’s mother Kitty owned the bar, Sundays were exceptionally quiet. Any other night you would hear car doors, laughing, glasses clinking, and the jukebox playing but Sundays were dead quiet. Bob and his brother were in their room getting ready for bed, when a sudden “BAM, BAM, BAM” sounded on their bedroom door. Bob said that he got out of his bed to look under the door, and didn’t see the shadow of anyone’s feet. Bob and his brother ran to get their mother from her apartment. Kitty knew that no one could possibly be at their door, because all of the doors were locked. Kitty shooed the boys back to bed. Now, back then Bob and his brother had metal hangers that they would use to put creases into their pants. Several of these hangers were hanging on the back of their door. The boys lied down, and within a few minutes… “BOOM, BOOM, BOOM” on the back of their door. The force was so hard, that the hangers flew off across the floor.
A friend of Bob’s father (Bob Shank, Sr.), Jack Frey had an even scary encounter in the same room. On a moonlit night in the summer of 1945, Bob Sr. and Jack Frey were planning a fishing trip for the next day. The men turned in to get some rest before their big trip. Jack was lying in his fixed bed sound asleep, when a sudden feeling woke him up. Throughout the night you could hear the sound of buzzing katydids, but all sound ceased as Jack turned to look at the entryway of the room. An apparition appeared and made its way to the foot of the bed. A second apparition appeared, and both floated in front of Jack. Paralyzed with fear, Jack felt like an eternity went by before both apparitions floated back through the doorway. It was only then that the buzzing of the katydids returned. Jack didn’t step foot into the tavern for over 25 years after that incident, and no one could blame him.
One of my favorite ghost stories is the one of the man in the top hat that haunts Gay Street. I have run to my car on several foggy mornings for the fear of the perfect storm, but luckily I have not had the pleasure of witnessing the distinguished young man. Some have not been so lucky. The man has been seen in a black silk top hat, and dressed in a long black tuxedo. No longer there, the man was seen to be walking a figure eight around the three trees that used to line the white fence on the square.
An article about Marietta haunts isn’t complete without talking about the lady in white at the Railroad House Inn. Annie Bell (in some stories, she is referred to as Anne Marie) lived next door to the Railroad House in the late 1960s, and would often travel to the property when it was unoccupied. Annie Bell is often seen in her white gown, carrying a lantern through the garden. Thought to be a witch in real life, brooms were found on the property worn down to the threads in each room. Luckily Annie doesn’t appear to most people, typically only men but be weary, she may just put a hex on you.
There are so many more tales to tell, and many Mariettians are happy to share. All you have to do is ask, if you dare.
“Ghosts don’t haunt us. That’s not how it works. They’re present among us because we won’t let go of them.”
“I don’t believe in ghosts,” I said, faintly.
“Some people can’t see the color red. That doesn’t mean it isn’t there,” she replied.”
― Sue Grafton, M is for Malice