How many readers watch and enjoy the summer aerial displays above our town?

No,  I’m not referring to the fantastic fireworks’ displays that occur on or around the 4th of July each summer. 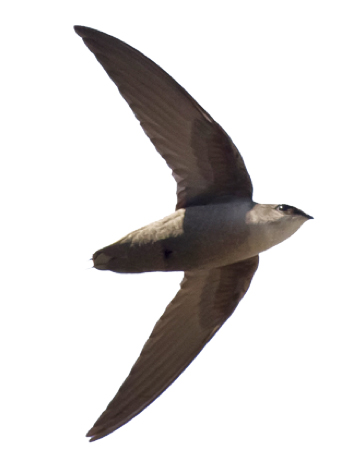 No, and I’m not talking about the very large and very prevalent vultures, both turkey and black,that grace (?) mostly the center and western part of Marietta year- round.

I’m referring to the very much smaller chimney swifts that arrive here about mid-April and scour the skies above Marietta until they depart near the beginning of October.

These small, dark birds procure all of their food by catching flying insects. This is the reason they can be seen throughout late spring, entire summer, and early fall days soaring above our town. Experts claim that an individual chimney swift can eat as many as 3000 flying insects a day! They often fly very high in the sky but, especially in very humid weather, they forage much lower. The lowest height that I have observed them flying is about 30 feet above ground level. Typically, a mated pair of swifts fly in close proximity of each other. After their young have fledged (left the nest) you can see the entire family feeding together in the sky. They often “chatter” when flying and, if conditions are right, you can actually hear them. Several times during the summer, usually while sitting on our patio, my wife and I are made aware of the swifts’ presence by hearing their chatter.

As mentioned, chimney swifts at a distance appear black in color but, actually they are dusky brown or grey. In size, they are about five inches from beak to tail with a wingspan of about 10 inches …or twice their body length. They have been described as “flying cigars”. Somewhat surprisingly, they are closely related to hummingbirds.

You will never see chimney swifts perching on wires or on tree branches because their legs and feet are short and small. They can only cling to vertical surfaces. Even during nesting, they build their nests on a vertical surface, most often inside a chimney – thus the source of their name. Prior to the arrival of the American colonists and the construction of buildings with chimneys, swifts almost exclusively roosted and nested in large, hollow trees. However now, having adapted well to a changed environment, they almost exclusively reside in chimney-type structures. As much as I have observed chimney swifts in Marietta, I have yet to see them entering any chimneys in town. I’m sure that they do and if any readers know of any places they reside, I’d very much appreciate knowing of these locations.

Where do they go when they leave Marietta in mid-autumn?  Until the early 1800’s it was commonly thought that chimney swifts actually hibernated – such as bears or groundhogs do. However, we now know that they migrate to South America, specifically to Peru and other northwestern South American countries. This is a distance of approximately 3500 miles!

So, this summer, take a look up in the sky, especially if you hear a curious “chatter” coming from up above. You may have a good chance of seeing some flying cigars !