The holidays present a medley of emotions for me. Growing up, every Thanksgiving was held at my Aunt Dawn’s house until our family grew beyond the capacity of her home. Every Christmas Eve was held at my grandparents’ house, until my papa passed away, and my nana unfortunately could not keep the house. Every Christmas Day was spent with my immediate family, until we all left the nest, and had nests of our own. Once I joined the workforce, I succumbed to working most holidays, my grandmother passed away eight years after my papa, and family traditions that I grew to love started to become a distant memory. I slowly began to loathe this time of year. 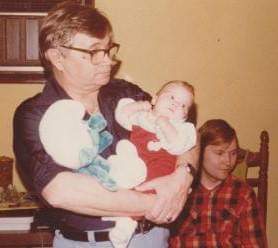 The year 2000 was a year that I can never forget. After our family began to get too large for my aunt’s house, we started to have our Thanksgiving dinner at Glenn Lebanon Firehall where my Uncle Tom has been a volunteer firefighter for as long as I can remember. Without fail, Alice’s Restaurant would be playing on the radio as we made the small hike to the firehall. As we arrived, we would all unload the goodies from the car, and file in. The Westminster Dog Show would be playing in the background as we waited for everyone to arrive, so that we could begin eating. I loved the smells in the air, I loved the warmth of family togetherness. Thanksgiving was the kick-off to the holiday charades. No one was prepared when my papa went in to the hospital just a few short days later. We were all crushed when he passed away on December 1. I remember thinking I couldn’t think. My mind was an empty void. Christmas Eve was just weird; there was no joy, or excitement. I remember just feeling like I was just going through the motions, trying to keep it together but for whom?

Every year after that I just got angrier. No one seemed to care about tradition. Thanksgiving was a holiday that I opted to skip entirely. Black Friday became the bane of my existence. Christmas Eve turned into a random day off that we could barely muster to fit into our busy schedules, and Christmas Day just became lackluster. The holidays just became more and more of a chore for me. I found myself shutting down, no one seemed to care, and who could blame them? Even if I could find it in my heart to gather up a sense of holiday cheer, I lost it all when my nana passed away on January 15, 2008.

Officially dubbed “Suckfest 08,” I began to feel lost in life. I came home from work one day, and realized that I had no drive anymore, no passion. I was a mass of misery just taking up space. I remember looking in the mirror one day, and absolutely hated what I saw. I knew I needed to make a change in life because I was on a slippery slope to no man’s land. All of a sudden there was a new smell in the air; determination. 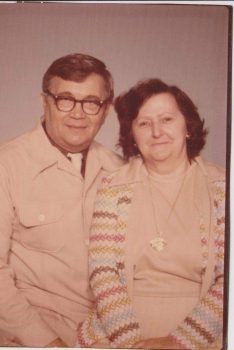 I couldn’t believe that I was registering for college classes just a few short weeks later. I finally had a purpose, even if it was just an expensive piece of paper. I was on a mission, and I wasn’t going to stop until I got my degree. While going to school, I worked three jobs just to keep myself busy. The more I pushed myself, the less time I spent thinking about the past. I had to find a balance though; keep pushing myself to insanity, or level off and potentially allow the negativity to seep underneath my door. My balance came in the fall of 2010 when I met Jack.
Jack didn’t just accept my crazy, he embraced it. For the first time it was okay for me to cry over something trivial, because even though something cute set me off, I was crying for a multitude of reasons. Jack would hug me, wipe my tears, say something stupid to make me laugh, and all was good in the world again. He let me be me, and loved me unconditionally.
Our first Thanksgiving together I was nervous as hell. Jack made the mistake of telling me that his grandmother hated tattoos.

Awesome, this will end well…
Just be yourself, she’s going to love you.

As we made our trek to the little farmhouse in York, Alice’s Restaurant came on the radio, and instantly I felt like I was twelve again. I giggled, and Jack asked what was so funny. I simply replied, “It’s not officially Thanksgiving until you hear Alice’s Restaurant”. I walked into his Grandma Theda’s house with a feeling of impending doom. I followed Jack around like a lost little puppy, forever in his shadow. I slowly let my guard down, and found myself having a great time. By the end of the day, Theda asked, “Will we see you at Christmas? We look forward to it.” I couldn’t believe my ears. I enthusiastically said yes, and gave her the biggest hug I could muster. I found myself at my in-laws on Christmas Eve; sitting around the television watching A Christmas Story, and taking turns opening gifts. It was magically nostalgic. I woke up on Christmas morning, and asked Jack if we could watch Emmet Otter’s Jug Band Christmas while opening up our gifts (a tradition that we’ve upheld every year since), and later on that day we made the familiar trip to Grandma Theda’s. I walked through the door first, and I received a warm hug from Theda and Grandpa Jake. I watched as other family members filed in, gifts in hand, holiday cheers being spoken and consumed. There it was, that feeling again. The feeling started as a warm sensation in my toes, and slowly crept up my spine. By the end of the day, my heart was full. It was on the drive home that I cried, but it wasn’t tears of desperation or exhaustion; these were tears of joy. All of those feelings that I thought were long gone, have now resurfaced. I felt whole. 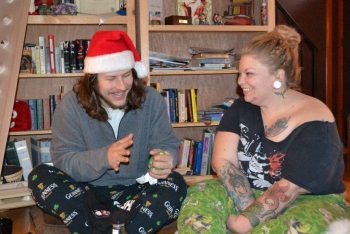 Every year since, Jack and I alternate where we spend Thanksgiving (either in Lebanon with my family, or in York with his), and if Alice’s Restaurant doesn’t play on the radio we sit in the car and listen to it on my phone. We have a family Christmas gathering with my family the week before Christmas, and spend Christmas Eve and Christmas Day with my in-laws. Life has a funny way of working itself out; sometimes you just have to be the driving force.

The best and most beautiful things in the world cannot be seen or even touched – they must be felt with the heart.
~Helen Keller