When I was a child, I loved to explore the woods and imagine that I was on the hunt for a secret, buried treasure.  Strolling through Mother Nature’s land lead to many mystic places that my childhood active imagination would conger up.  These mystic places were across the street from the home I grew up in. A suburb of Detroit, to be exact.

Most of the time, I would take the shortcut through these memorable woods on the way home from school.  These woods were the place for my friends and I to collect acorns, orange, red, and yellow leaves during Autumn, and just to take a step back and enjoy the sights and sounds of nature.

These childhood memories were great.  I more than recently found another great place to explore nature, and to find hidden treasures along the way.  That place is the Northwest Lancaster County River Trail. The best part is that it runs through the heart of historic Marietta, Pennsylvania.

Mother Nature blesses us each year with the changing seasons of Winter, Spring, Summer, and my all time favorite, Autumn.  Her hidden beauty is a treasure in itself. Take Winter, for example. Like many of you, I look forward to Spring, but if we don’t allow ourselves to take in all four seasons for what they are, these treasures are lost.

For many winters, I have longed to be at the right place at the right time to capture the beauty of a freshly laid out snow scene that looks like a Norman Rockwell painting.  I remember this day very well- I was up at first light and was eager to look out the window. The trees and ground glistened in white. A very short time later, I was walking towards the Northwest Lancaster County River Trail with my digital single-lens reflex camera (DSLR) in hand.

I smiled at the scene that was laid out before me.  It was a winter’s paradise. There was a peace in the air as well.  The only sound was a slight cool breeze and pockets of snow beginning to fall from the branches.  A couple clicks of the shutter was all it took to capture Winter’s Treasure. 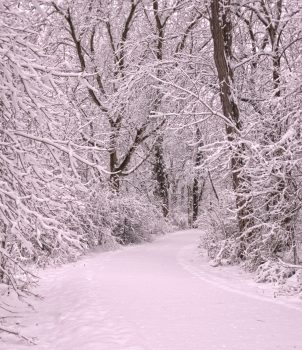 TIP – When photographing snow scenes with a DSLR set your white balance to the flash setting to keep the snow white.  You also want to set your +/- to a + ⅓ or more and capture the images in RAW format. Your camera sees only grey. Adding the exposure helps produce a properly exposed snow scene.  This works when capturing brides white wedding dresses, and other white subjects. Photographing in RAW format lets you do more in post processing. A jpeg image is already compressed.  That said, a compressed image will show a lot more grain or noise in the image.

When Spring finally arrives, everything appears to be new and fresh.  The sun starts to rise earlier, and set later than 5 p.m., the birds are singing their songs, and we are blessed with a new awakening.  Taking a stroll along the Northwest Lancaster County River Trail during Spring takes on a whole new meaning. A new treasure hunt awaits. 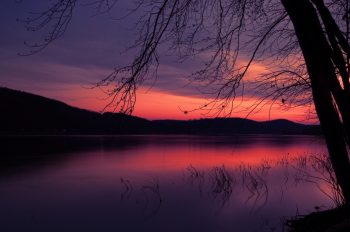 The evening I captured this image was the first warm and sunny day in Spring of 2018.  It seemed like a fine day to venture along the trail. The Susquehanna River was fairly calm.  Just a slight breeze was blowing.

I wasn’t sure where I wanted to set up my gear for this outing, so I made my way to the boat launch area near the ruins.  My gear was set up. My trusty DSLR on my tripod, split neutral density filter in place, and last but not least, my remote shutter release was plugged in.  As I waited for the sun to get closer to the horizon, I took in the various happenings. With it being such a warm evening, a few boaters were out on the water.  Families were riding their bikes, fishing, and taking nature walks. Many greetings were made as I waited.

Unlike some photographers, I actually prefer to photograph the sunset after the sun is below the horizon.  The reason? The sun doesn’t always have to be in the photo, and I just like the end result better. There is nothing wrong with leaving the sun in the image, though.  The sunset image shown was one of the last ones I captured. It almost seemed like the clouds were going to hide the sun completely, but Mother Nature didn’t disappoint me.  The tree and the water logged foreground elements made a nice silhouette, as did the distant hills in the background. Another treasure located.

TIP – When photographing a sunset with your DSLR, be sure to mount it on a good quality tripod.  A tripod helps with getting sharp images when the lighting is too dark. Can you up the shutter? Yes, if you don’t mind grain or noise in the photo.  Get the best tripod that you can afford. A split density filter is used to get a better overall exposure. This filter is dark on one end and gradually gets lighter on the other end.  They are normally square and attach to the front of the lens with an adapter. A shutter release is used to also get sharp images. Speaking of sharpness, if your lens or camera has instant stabilization it’s best to turn it off when using a tripod.  I’m speaking from experience here. One more tip- don’t pack up right after the sun sets. You are in for a sweet surprise from Mother Nature. Sometimes there are treasures to be found, only for them to disappear. 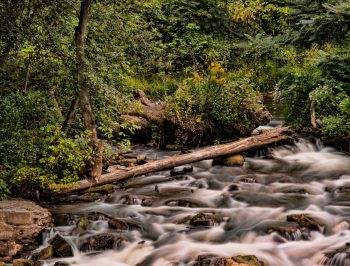 If you ask me, Summer should be treasured, as it always seems to go by extremely fast.  The Summer image is what I call an iconic treasure. On the day I captured this image, I was on an outing with the Lancaster Camera Club.  We set out to discover the Northwest River Trail photographically.

This was my first time exploring the Southern end of the trail.  Walking across the bridge the sound of rushing water filled the air.  I immediately found a place to photograph the stream that is no longer there.  Not as of today’s writing at least. A treasure no less, though.

As much as I wanted a Norman Rockwell type Winter snow scene, I wanted a cotton candy like stream photo.  What do I mean by cotton candy? It’s a long exposure and when done correctly, the water has that cotton candy look and feel to it.

TIP – A tripod and shutter release should be used when photographing cotton candy type stream photos.  I don’t know about you, but I cannot hold my DSLR for two or more seconds without moving it.

Autumn.  My favorite time of year.  Another season that goes by way too fast.  In a blink of an eye, the stunning reds, oranges, and gold disappear before you can say “Old Man Winter”. 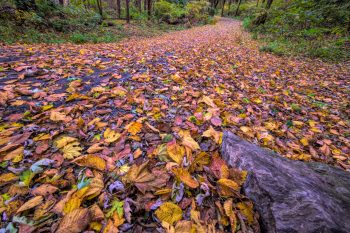 The season of Autumn is another reason to treasure the beautiful colors that only Mother Nature can provide.  A great place to find her Autumn beauties is the Northwest Lancaster County River Trail. On this particular morning, I was debating if it would be worth my while to hunt for fall color along the trail.  It was early November, after all. The colors would be long gone, or so I thought- 2018 didn’t bring in a lot of the orange, red, and gold hues, but treasure I did find.

Not too far from the Gay Street trail entrance is a U.S. Veterans bench memorial.  Near the bench is a rather large rock. In this image, I used an extreme wide angle lens.  Lenses of this magnitude enhance the foreground elements, making them seem larger than they are in real life.  I like the effect.

Getting low to the ground and setting the lens at its widest angle, I captured the image.  Because it was a cloudy day, I purposely left out the grey sky. I enhanced the colors in post processing, as I wanted those treasured Autumn colors to last a little longer.

Whether you take a walk with nature to take a break, ride your bike, or capture the treasures along the way with your camera, the Northwest Lancaster County River Trail is a treasure to enjoy all year long.  If you happen to pass by a redhead with her Pentax camera, be sure to say “hi”. Happy trails!

About the Author: Cynthia L Sperko has been a Marietta resident since October of 1995.  She had enough of city life and was looking forward to a change of pace. Cynthia is a self employed creative photographer who specializes in Personal Brand Photography.  When she is not helping creative professionals promote their brand, she enjoys capturing nature, travel, and historic places of interest. Cynthia also photographs vintage railroad.  Cynthia would like to invite you to follow her travels via her blog (AKA Photo Journal.) Sign up on her Fine Art Landscape page. View Cynthia’s website at CynthiaLSperko.com.