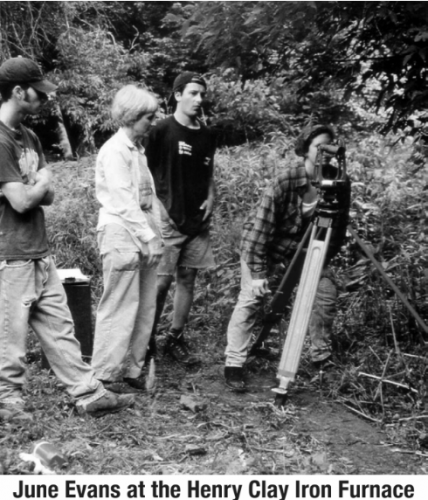 During the summers of 1988 to 1992, Millersville
University students lead by Dr. June Evans, trudged down
the old railroad bed to the Henry Clay Iron
Furnace (this railroad bed has now been
transformed into the Lancaster County
Northwest River Trail). The students
carried shovels, trowels, screens,
and notebooks. They were going to put into
practice what they had learned in the
classroom – a “dig” of a historical site.

Dr. June Evans was born in Washington, D.C. In 1941
her family moved to York County where she graduated
valedictorian at Wrightsville High School. She attended
Goucher College, graduating with honors in chemistry.
She then returned to college after raising her family. She
received her Ph. D.in Anthropology from The American
University, where she later worked as an adjunct professor,
teaching courses in human origins and archaeology.
In 1990, after moving back to York County, June began
teaching anthropology and archaeology at Millersville
University, including summer field schools and the initiating
of the archaeology minor. June was actively involved in local
community planning, political, and environmental issues
through numerous organizations in York and Lancaster
Counties. She was actively involved in Rivertownes USA,
leading numerous walking tours through the Lancaster
County iron furnaces.

The Henry Clay Furnace was built by Peter Haldeman
in 1845. The furnace was under the management of
several owners until Clement Brooke Grubb purchased the
furnace. Grubb was the great-grandson of Peter Grubb who
discovered the Cornwall ore deposit. In 1876, pig iron worth
$81,871 was cast. The furnace was taken out of blast for the
last time in 1889.

From the “digs” at the furnace, the teams uncovered,
classified, marked and preserved over 50,000 artifacts.
These artifacts are now housed at the Musselman/Vesta
Iron Furnace center at 26 Furnace Road in Marietta.

Many of the artifacts are displayed in the Dr. June Evans
Henry Clay Exhibit. The exhibit is located in the second
room of the Musselman/Vesta Iron Furnace Center. The
exhibit is housed in a beautiful historic cabinet, donated by
Bob and Kathy Lehman, from the local Billmeyer Jewelry
Store in Marietta, PA. The cabinet was restored by local
resident Lillian Hill during the past winter.

The exhibit showcases dishes, bottles, bowls, a steel toy
stove and many other items that were uncovered at the “dig.”
The exhibit also includes photos of the “digs,” quadrant
maps, and the Sanborn Insurance Map that details the
buildings of the Henry Clay Furnace complex. 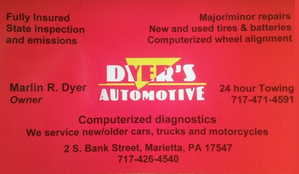