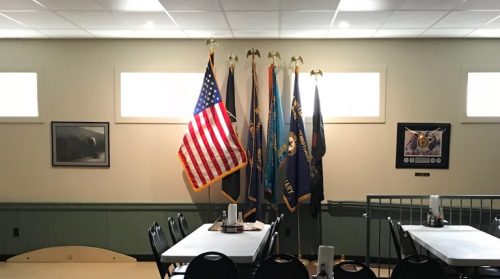 There’s a little known gem located on South Gay Street in Marietta, and it’s the American Legion William Brenner Post 466. The minute you walk in, you feel at home. The Legion is more than just a social organization to get cheap drinks, it’s a place where all armed forces can come together and continue to give back to the community many fought to protect.

Let’s look at the history of Post 466, and we’ll start with how it got its name. PVT William Brenner from West Walnut Street in Marietta was killed in action near Courmont, France on July 30, 1918. PVT William Brenner and his unit received World War One Victory Medal as well as the World War One Occupation Medal. PVT Brenner’s final resting place is located at the Marietta Cemetery.

The legion has had its fair share of hardships, too. On December 2, 1995, a fire started in the ceiling above the men’s restroom. It took workers about 18 months to rebuild the Legion. At the time of the rebuild, they built the Legion 24” above the flood zone. This is no longer the case. While many Legions allow smoking within the club, Post 466 officially went non-smoking on January 1, 2017. They have gained almost 200 members since going non-smoking.

There are multiple ways you can join the Legion. As a social member you can visit your home post. As a veteran or active member of the armed forces you can join as a Legionnaire. As a spouse or descendant of a veteran you can join as a Sons of the American Legion or Ladies Auxiliary. If you are a member of the Legion, and enjoy riding motorcycles, you can also join the Legion Riders. Each organization holds meetings monthly at Post 466; Sons of the Legion – 3rd Thursdays at 7:00 p.m., Woman’s Auxiliary – 3rd Wednesday at 7:00 p.m., Legion Riders – 1st Wednesday at 7:30 p.m., Legion Home Association – 3rd Tuesday at 6:00 p.m., and Legionnaires meets – 3rd Tuesday at 7:00 p.m.

You can check out some of the Legions specials or upcoming events on their Facebook page and newly designed website. Here are a few upcoming events that are worth checking out. On June 23rd a Red, White, and Blue ride hosted by the Mount Joy Legion riders to benefit the Northwest K-9 unit. On August 11th there will be a ride held by the Marietta Legion Riders to support the veteran service canines organization. On August 18th music trivia with Stan Tucker from 7:00-9:00. On Sunday, October 7th Marietta Legion Riders will have their annual Coot Memorial Ride. The Legion is also currently collecting donations for the Marietta Fireworks, and soda tabs for the Ronald McDonald House.

As a Ladies Auxiliary member I can personally attest to the always friendly atmosphere. Commander Joe Portner will win you over with his humor and smile, while employees like Julie, Barbie, Nikki, Alaina, and Megan will make you feel like part of the family. The Legion truly feels like a home away from home.

The freedoms and prosperity we enjoy in America are thanks to the brave men and women who have served in our armed forces.
~ Bill Foster