The 3rd Annual Chowderfest in Marietta is
scheduled for Saturday, April 7th, from 11
a.m. until 3 p.m. Ed Lincoln Jr. and co-owners
of the Railroad House, Joey Bowden and
Freddy States, have teamed-up again to
raise money for the Lancaster County
SPCA, The Sebastian Foundation, Marietta
Fire Department, and the Marietta Market.
Last year’s event sold out with over 350
attendees through the door and this year
they have raised the attendance and stakes. 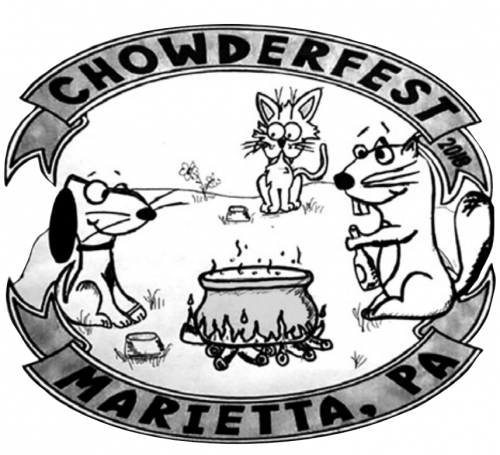 “Last year was such an incredible turnout
of support from all aspects; we raised nearly four
thousand dollars in that short time span. We ran out of space
and some restaurants ran out of their chowder, so this year
we pushed back the date to utilize the whole property on the
corner of Front and Perry streets,” stated Mr. Lincoln.

“It’s very simple to get tickets.” said Joey Bowden. “You can
either stop by the Railroad House during hours of operation
and purchase them for $12 each, or log onto Event Brite
website, search 3rd Annual Chowderfest and get them there.
There will possibly be tickets the day of the event, but don’t
count on it. Get them early so you don’t miss out on one of the
biggest events of the year in Marietta.”

Chowderfest is a competition between restaurants to
provide the best soup, chowder, or bisque to be sampled and
judged by 1) the public, 2) a group of select non-competing
chefs and restauranteurs from out of the area, and 3) by
representatives of the corporate sponsors for their individual
awards. Red Roof Inn, Carriage House Construction, and Bemer
USA are the three corporate sponsors thus far, and will each
present their own picks at the end of the day.

The public will receive a ballot card with
all the competitors’ names and a scale
of 1-10, 1 being the lowest and 10 the
highest, the guest will stroll about the
premises and sample/judge the chowder,
soup, or bisque. Upon completion, they
will turn in the ballot card and the tally
will be added-up. Last year The Railroad
House and Chef Talon Lewis narrowly
won the popular vote over the John Wright
Restaurant, with the Judges’ Pick going to
McCleary’s and Chef Matt Lasala and The Red Roof
Inn award going to Nick’s Bistro. This year the Chowderfest
will have some new blood, but unfortunately a couple from
last year had prior commitments and could not be involved.
This year the competitors may include but are not limited to:

that are wood-fired or inspired that day as well as
favorite locally-sourced foods.
The competition should be hot, as well as the music
by the Towson Steele Solution, JC Fetlock, and a few
guest artists. Also on hand will be caricature artist
Louis Welsh from Gettysburg and a silent auction for
the benefit. Should you have any questions or would
like to volunteer or donate a silent auction item, please
contact Ed Lincoln, Jr. at Chowderfest16@gmail.com or
text or call him at 717-819-6265.