Written by Jack Ries
I don’t think I’m telling any tales out of school when I say that Marietta is full of old stuff. There’s the bank building and the theater on West Market Street, all of the churches in the borough, Shank’s Tavern (and Bob Shank’s Volvo), and even the remnants of the last operating iron furnace in the area. But there’s one building that many people may not know a lot about, but probably should. That building is the Union Meeting House, which sits at 80 North Waterford Avenue in the borough. Let’s take a brief look at the history of this small, yet wonderful, building. 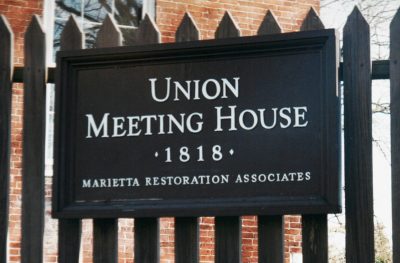 The cornerstone of the Union Meeting House was laid in 1818, on land granted to the borough by David Cook. Mr. Cook was the founder of the section of town that was originally called New Haven. The cost of the construction was $1,477, a large sum of money in the early 19th Century. All of those funds were secured through donations from the public, including a donation by Lancaster’s most famous son and future president (at the time), James Buchanan. The construction of the building was finished in 1823, and minor additions/ changes were made over the years of its use. 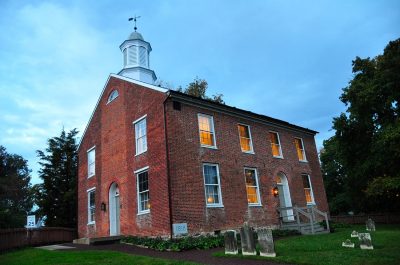 The Union Meeting House was constructed as a place of worship, to be shared by many people of different faiths. Presbyterians, Lutherans, and Episcopalians made up the bulk of the worshipers who gathered at the building. An organ was installed in the second-story loft in 1854, at the request of the worshipers. The last worship service to take place in the building was in 1976. After that point, the building would have succumbed to age and the elements, as it sat primarily unused for the next 8 years. But in 1984, the Marietta Restoration Associates (the purveyors of this fine publication that you’re currently reading) started a 99 year lease of the building from the borough of Marietta, and began restoring the building to the beautiful state it is currently in.

The Marietta Restoration Associates has plans to continue improving the Union Meeting House and the property it lies upon, all the while leaving the historic aesthetic of the building untouched. There are plans for improved handicapped access, expanded parking, and updated exterior lighting.

The Union Meeting House is currently available to rent for all kinds of events, including but not limited to: business meetings, corporate events, reunions, birthdays, weddings, baby & bridal showers, or anniversaries. If you would like to rent the Union Meeting House for an event you’re planning, feel free to contact Rebecca Baltozer by phone at (717) 224-0170 or by email at mrsbaltozer@ gmail.com. Event planning assistance, tables, and chairs are all available for your rental, and the building will accommodate approximately 110 guests.

If you’ve never attended or hosted an event at the Union Meeting House, I highly recommend it. It’s a great way to support our local economy and our historical preservation efforts. Plus, as the name of this little article implies, you’ll be hosting your event in an actual piece of history. 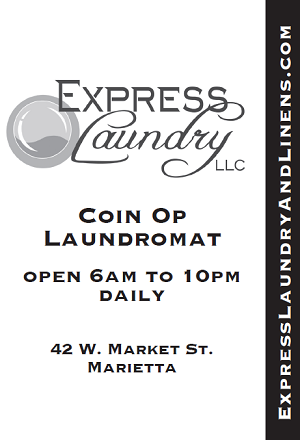