We all know that April showers bring May flowers, but Spring also presents one of the best pub crawls this side of the river! The Marietta Beer & Music Festival and Pub Crawl is upon us, and it’s bigger and better than ever! The pub crawl for this year is on June 3rd, from 3:00 p.m. until 9:00 p.m. There are never any covers at our local establishments, but there is a ton of fun to be had. 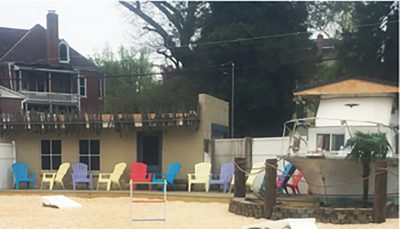 Pig Iron Brewing Company invites you to enjoy the annual Pub Crawl on their brand new deck! Grab a Pig Iron Pint at the bar, or paddle your way back to the boat for some local spirits. Special entertainment by Jim Rhoads, the one man band and karaoke show from Elizabethtown. If you have never experienced Jim Rhoads before, it’s sure to be a show that you don’t want to miss.

McCleary’s has an amazing line up, as always. Stop in and find a spot as “Killin’ the Blues” kicks off the festivities. Lead singer Albie von Schaaf, also of “Moe Blues”, along with bassist David Denisewicz, and drummer Dodd Gross will tickle your musical taste buds with anything from Bill Withers to Tom Waits, and will toss in some delectable original songs, as well. Get your country on with the “Happy Sally” band at 6:00 p.m.. “Happy Sally” features Sally Keaveney (lead vocals/rhythm guitar), Paul Keaveney (lead guitar), Dave Spink (drums/backing vocals), and Matt Hershey (bass guitar). “Happy Sally” delightfully mixes bluegrass, Americana, and blues while maintaining an old school feel. It’s certainly a show that I’m not going to miss. Ending the night at McCleary’s is “The Backseat Hooligans”. Hailing from Spring Grove, “The Backseat Hooligans” rock the Irish Punk/Rock scene. This lineup doesn’t get much better, and is sure to be an awesome time.

Along with beer specials, music kicks off at Shank’s with local favorite “Corty Byron & Friends”. Corty Byron has been active as a musician for over a decade, and has become a fixture of his hometown Central Pennsylvania music scene. “Ragtime Willie” ends the night with their crazy ensemble of traditional country, blues, originals, and pop country tunes, thus creating a show that you will be cheering for more.

For those of you who are planning to be a designated driver, or just prefer non-alcoholic drinks; swing by Heart Cafe. Offering yummy lite fare eats, and 10% off all beverages during pub crawl.

Please remember to drink responsively and bring cash; many establishments may not accept credit cards due to the high volume of people. There is plenty of parking along Front Street and the various cross streets along the way, but be cautious of the other patrons who are walking down Front Street.

So come out for pub crawl, and have a blast! Marietta welcomes you!

Some establishments may have entertainment that has not been listed in this article, so be sure to check back to https://marietta-pa.com/events/pub-crawl/ for more details.