If you know me, you know that I have a love affair with food. Food is always there for you, and it almost never lets you down. My eating habits may be beginning to catch up with me as I get older, but even so, I can’t resist trying new things at new places. That’s why I’ve taken an interest in Marietta’s newest catering business, Kristen’s Katering.

Kristen Kaylor, known to friends as “Fuddy”, is the owner and chef in charge of Kristen’s Katering. I was introduced to her by my wife, Trisha, and it wasn’t very long after meeting her, that I got my first taste of Kristen’s culinary skills. It was after sampling some of her food (many, many times), and being won over by her friendly, outgoing personality, that I decided to get the inside scoop on her new business and share that information with all of you.

Kristen has been cooking for friends and family for her entire life, having learned many of her skills, recipes, and secret tricks from her mother and her grandmothers. She has honed her catering skills over the past dozen years, preparing food for weddings, parties, and family events. She used to work full time and just do catering on the side, but demand for her handiwork at events grew so much that she had to take part-time hours at work, and eventually, quit working at her regular nine-to-five job to focus exclusively on cooking. At the start of 2016, she decided to make this her full-time career, and applied for her catering license, which she officially received this past April. Kristen is now running full-speed in catering mode, and her devotion to her craft shows up in everything she makes. As a man who has sampled much of her work, I can tell you that each dish is even more delicious than the last.

Much of her food would be considered home style cooking, and in fact, many of the recipes she utilizes are old family recipes that have been handed down from generation to generation. But don’t let her family roots and down-home style fool you. Her food is prepped and presented just as well as any upper-crust restaurant, and tastes just as good. She will cook the tried and tested family favorites of macaroni and cheese, quiche, or ham loaf, but she can also serve you a four-star presentation of salmon with risotto, or seafood bisque. The possibilities are endless.

At this point, you might be wondering: “How have you been able to try all these delicious offerings, and where can I get my hands on some of this food?” Well, funny you should ask, because I was just about to get to that. Currently, Kristen is working out of a shared commercial kitchen in Mount Joy. She uses the kitchen not only to prepare her meals for scheduled catering events, but also for her weekly “What’s for Dinner?” Facebook events. Every week she will put a couple of entrees, sides, and desserts up for sale through her Facebook page, www.facebook.com/KristensKatering. Anyone can order, and pickup is on Wednesdays from 4:00-6:00 p.m. at the Carriage House in Maytown (it’s just behind the post office). If you don’t want to commit to a full meal (but trust me, you should), you can also head down to Shank’s Tavern on Front Street in Marietta. She’s been cooking the cheesecakes for Shank’s since May of this year. If wine and music is more your style, she will have her food available at Free Music Fridays at the Vineyards at Grandview in Mount Joy. Kristen’s Katering is available for events, large and small. She can also be contacted by phone at (717) 606-2399. 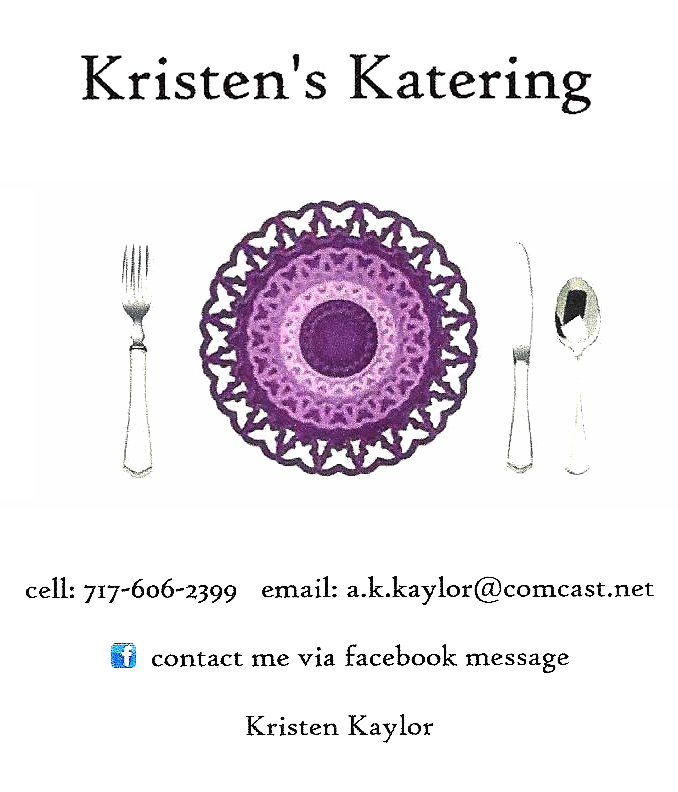 Lastly, I should mention that some of the best cooking she’s ever done was for the annual Shank’s Tavern gumbo cookoff. Just in case you were wondering, she’s a two-time champion at that event. I asked her how the crowd liked her gumbo. She answered by telling me that the first year she won, one fellow in particular kept coming up to her and asking for seconds, thirds, even fourth servings. At the end of the event, she was out of gumbo, much to the dismay of this food fan. When he asked if she had any more left, she jokingly said, “No, but you’re welcome to lick the bowl if you want.” And so of course, he did. And before you ask, no, it wasn’t me. But it very easily could have been.