The first time I set foot in Marietta Pioneer Fire Company last year, I was disappointed that there were no dalmatians. I mean, I’ve been inside other fire stations, and sure, they didn’t have dalmatians either, but I guess there was a little part of me that thought “This time will be different.” Alas, it wasn’t. But this article isn’t about a need for spotted dogs at our local firehouse, instead, it’s about a need for qualified, motivated individuals who want to serve their community. 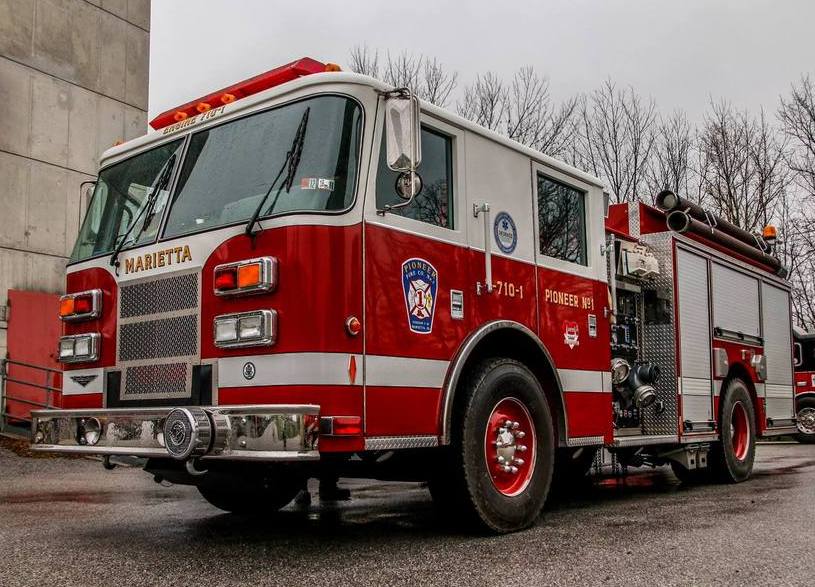 First off, let’s go over some of the details of this fire department. Pioneer Number 1 was founded in 1840. The building that currently stands at 200 North Waterford Ave was built in 1974. Recently, an addition was finished, adding an assembly hall, an extra equipment bay, offices, and a lounge for the volunteers. The fire department serves Marietta, Conoy, East Donegal, Mount Joy, East Hempfield, and even eastern York County. They have at their disposal an engine truck, a tanker truck, a squad truck, two rescue boats, a utility trailer for carrying gear, and a whole plethora of saws, axes, defibrillators, flood pumps, hoses; you get the idea.

Seeing as how I’ve never been a firefighter, and really have no idea what I’m talking about regarding the topic, I decided to speak with the fire chief, Brandon Smith, who took the reigns of Pioneer Fire Company on January 1, 2016. He told me that Pioneer is a volunteer fire department, like many others in the state. They are staffed by community members who wish to make a positive impact on their friends and neighbors’ lives. Likewise, they are not funded by the state or local government, but instead by the people they serve.

Becoming a volunteer firefighter is no easy task, but there are programs and services provided by the state to help potential recruits along their path. I should mention that the minimum age for recruits is 14, and while there is no maximum age limit, the department asks that all applicants be able-bodied and of sound mind. All potential recruits must also pass a background check (I guess it would be kind of embarrassing to accidentally hire an arsonist as a firefighter).

The training is intense, and it takes a while. There are over 200 hours worth of classroom and practical training that a volunteer must go through. The plus side to this, however, is that the fire department pays for 100% of the training. But don’t think that once you’ve done your 200 hours you’re qualified to handle everything the job can throw at you. Learning how to become a better firefighter is an ongoing process. Pioneer holds training twice a week, on Mondays and Thursdays, and there are continuing training and certification programs that volunteers must attend in order to get and maintain certifications in things like first aid/CPR, interior firefighting, hazardous materials, river rescue, even driving the trucks or piloting the boats. Plus, when you’re not training, there is always maintenance and housekeeping that need to be done around the station.

This sounded like an awfully big commitment to me. I asked Chief Smith if that takes a toll on the volunteers. “Yes,” he replied, “it can, but we’re a family here. We take care of each other. These guys are like my second family.” He told me that even with all of the requirements, all of the training, all of the stress from fire and rescue calls, morale stays high. This is obviously a very close-knit brotherhood; people who have their coworkers backs, both professionally and personally. They work with each other, sure, but they also spend their free time together, strengthening the bonds that make them such a great team. Moreover, these men and women would gladly put their lives on the line to make sure their community stays safe, and when a call comes in, they don’t think twice to act. They work hard, they play hard, and because of that, they share a camaraderie that could only be rivaled by an elite military unit.

Of course, there are other personnel needs besides fire crew. As I mentioned before, Pioneer Fire Company is mostly community funded. They pull in a great deal of their income through fund raising events such as car washes, chicken barbecues, and fun runs. These all take a great deal of time and manpower to organize, so they are always looking for community volunteers to spearhead and help out with these projects. And even if you don’t have the time to volunteer, you can still help out by throwing in a few bucks to get your car cleaned up during one of their car wash fundraisers (no firefighters in Speedos, though. Sorry, ladies). Every dollar counts, and more importantly, every dollar helps to keep our fire department in fighting shape. If you want to see what’s going on at Pioneer Fire Company, or how you can help out, stop by the fire station, check out their Facebook page (facebook.com/MPFC10), or simply drive past and see what’s on the board in front of the building.

I have to say that having the chance to speak with Chief Smith was a great opportunity for me. It really opened my eyes to exactly how committed these men and women are to their neighbors, and to the community in general. All of that aside, though, I wasn’t going to waste a face-to-face opportunity with the fire chief, so I asked him when we can expect to see some dalmatians riding on fire trucks down Market Street. Even though Chief Smith said he would love to have one, dogs just aren’t part of the station’s budget.

Oh well, at least I tried.