Hello Everyone! I can barely contain my excitement as I write for you this next installment of Tokens of History! Why? Because what you are about to read is a small account of a truly amazing series of events that have taken place over the course of a century in our quiet little river town. As stated in the previous issue, the theme for Tokens of History this year is topics that are exhibits in the Old Town Hall Museum. The topic for this piece is Dr. Alexander’s Lancaster Vaccine Farms, which were located where the Glaxo Smith Kline site is today, and was known to be a world leader in vaccine production. So let’s dive right in! 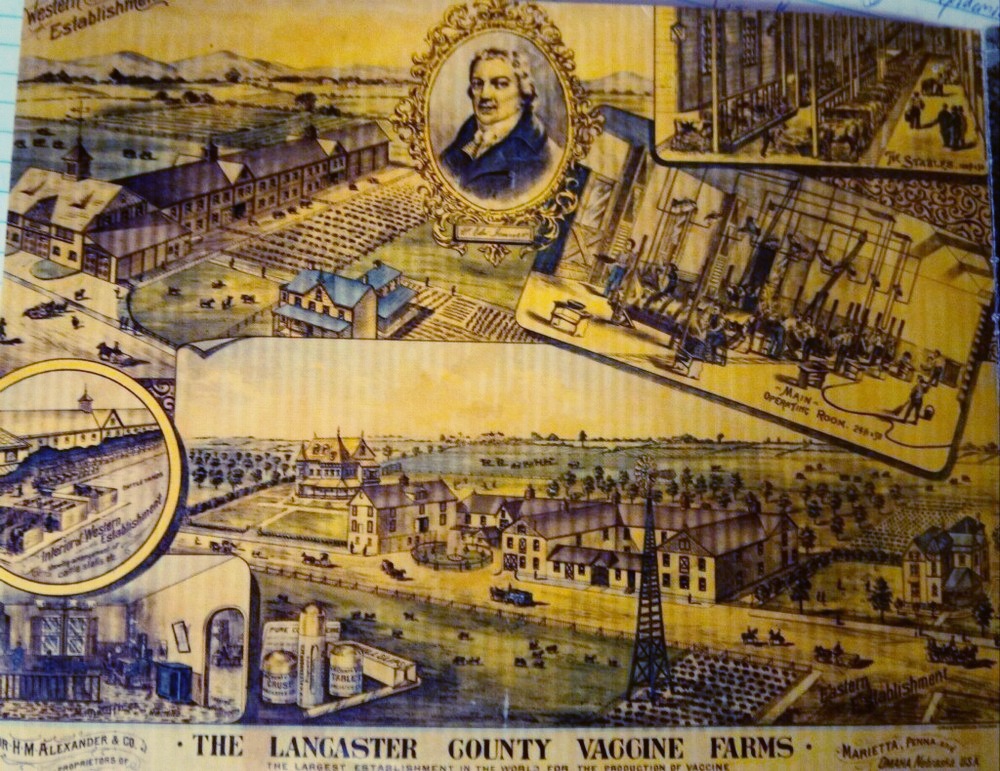 To get started, I’d like to first ask you: What does the term “disease” mean to you? In a watered down textbook definition, disease can be described as a disorder related to either structure or function or both within an organism, especially if it can be characterized by some type of observable symptom.

Disease, one of the “Four Horsemen of the Apocalypse,” has been a bane to human existence since the very beginning, yet it is through this adversity that we grow and become stronger as a species. Thanks to the continuous efforts in biotechnical research and its applications, many diseases have been virtually wiped off the proverbial map and Marietta had its own part to play in these efforts.

In 1878, a physician by the name of Dr. Hamil Alexander, a Lewisburg PA native who had only recently graduated with his M.D. from the University of Pennsylvania School of Medicine, had moved to Marietta to open up his own practice. During that time, both Marietta and Columbia were suffering from a variety of endemic diseases such as typhoid fever, cholera, and influenza. Perhaps one of the most deadly at that time, especially for children, was smallpox.

Smallpox, also known as Viriola major, was a debilitating and disfiguring disease which many times resulted in death. Outbreaks of smallpox virus in any local community could claim the lives of up to 35% of its victims, largely due to various localized factors such as general age of the population, cleanliness of environment (industrial areas vs farmland), degree of education (how to minimize the spread of infection), and location (are you close enough to get help). During the final stages of the disease, the victim would develop scads of lesions over their body, mainly focused on the face and extremities, and the victim could experience permanent facial and/or limb deformation and blindness.

Though the method for preventing smallpox had been known since 1796 through the efforts of Edward Jenner, an English physician who was able to demonstrate the use of cowpox as prevention against smallpox, problems with purification and availability of any type of vaccine were still very much present as there was a world-wide demand.

Seeing all the suffering his community was enduring, and acknowledging the simple fact that there were no commercially available vaccines in the United States, Dr. Alexander set out to formulate his own smallpox vaccine. In 1882, using smallpox virus he had obtained from one of his child patients, he was able to inoculate a heifer supplied to him by a local farmer with the virus. By taking samples of the lesions that developed on the heifer’s skin, Alexander would be able to develop vaccine using the skin samples as “seed” for the vaccine. On the very day he presented his findings to the Philadelphia Academy of Medicine, he returned to Marietta with more than a few orders for this new and pure vaccine.

Originally performing his work in a renovated chicken house located next to his own house at 299 W. Market St., Dr. Alexander quickly realized that the demand was too great and that he would not be able to keep up the pace of his operation. Within a year from his presentation in Philadelphia, he had purchased a farm located on the corner of Wasp and Biddle streets and had established a site for vaccine manufacturing, operating under the name of Lancaster County Vaccine Farms.

Hamil Alexander’s site would become the first commercial producer of the smallpox vaccine in the U.S. The efforts to maintain the new manufacturing site would grow to be all he could handle, and in 1889, at the ripe old age of 34, he closed his medical practice and dedicated himself solely to the production of smallpox vaccine as well as developing a vaccine for rabies and Tuberculin and Tetanus antitoxins. The site would continue on to receive the honor of being ranked as the world leader in smallpox vaccine production.

Over the course of one-hundred and thirty years, the Lancaster County Vaccine Farms site would exchange hands less than a handful of times, each time a change in name would accompany the exchange.

Dr. Hamil Alexander would pass in 1906 and the company would pass on to Dr. Samuel Gilliland, a veterinary doctor also from the University of Pennsylvania, who had originally started working at the site to maintain the animals and was adept in his foresight and leadership skills. Gilliland would maintain leadership over the company for the next twenty five years up until the plant would be acquired by a then rising force in the pharmaceutical industry, American Home Products. 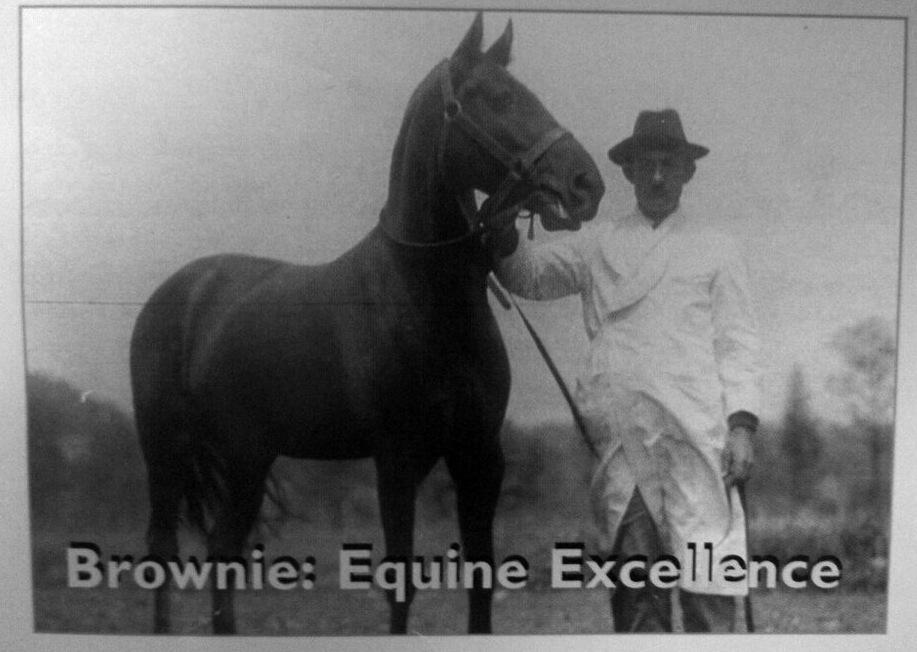 Merging what was then the Gilliland Laboratories with five other pharmaceutical and nutrition laboratories, American Home Products would coin the name Wyeth Laboratories which would stick with Marietta for over 50 years until its eventual purchase by Glaxo Smith Kline in 2006. However, it must be said that in between these exchanges, history was still in the making for our local vaccine site and understandably the most notable of it occurring under the name Wyeth.

During World War II, Tetanus was rampant throughout the ranks of our Allied forces. Wyeth was doing what they could to supply enough Tetanus antitoxin to the troops and that also meant that the animals, specifically horses, responsible for supplying this antitoxin were in overdrive, as well. In fact, there was one specific horse, named Brownie, who in 1952 was awarded a medal from the National Association for Medical Research for exceptional service to the cause. Over a period of ten years, the draft gelding yielded 244 gallons of blood which was processed to produce over 2 billion units of the antitoxin suitable for human use. After being retired from the Wyeth farm, he lived out the rest of his years in Conoy Township.

Further honors were awarded to Wyeth as part of American Home Products over the years. Upon the discovery of the Polio vaccine in the 1950’s, Wyeth in Marietta would be one of five laboratories selected to launch production of the vaccine during the initial nationwide trials.

By late 1979, the World Health Organization had announced the complete eradication of smallpox, worldwide, and Wyeth in Marietta had received formal recognition for its part during the process. This particular fact you must remember for things are about to get interesting.

With the eradication of the naturally occurring smallpox virus there was no longer any reason to mass produce the vaccine. I use the term “naturally occurring” because there have been instances in the past where smallpox has been researched by foreign powers for the sole purpose of being weaponized against their enemies. The research backfired, however, as the country responsible ended up releasing a more potent version of the smallpox virus against an unknowing group of their own citizens. Still, this was an alert to the world that smallpox could potentially be weaponized with disastrous effects. Over the years the numbers of existing units of the vaccine dwindled until in the U.S. there was only one reserve cache of the vaccine left at: you guessed it, Wyeth in Marietta, PA.

Interestingly enough, contingency plans were set in place in case of a national emergency that even the associates at Wyeth didn’t even know about. During the terrorist attacks against the U.S. on September 11th, 2001, those contingency plans were effectively carried out without question. Needless to say many surprises were in store for the Wyeth family.

I just so happen to work with two former associates of Wyeth who were employed at the Marietta site during the time of this historical national crisis and I was able to get a rare first person account of the events that took place at the site during the 9/11 attacks.

During the nine o’clock coffee break, A-game (an alias that we affectionately use at my work for the woman whose story I am recounting) witnessed the senseless destruction of the first World Trade Center tower on the TV screens in the cafeteria. By ten thirty or eleven a.m., government agents were on site to initiate disaster protocols. These protocols called for the lockdown and removal of the last known U.S. cache of the smallpox vaccine and safeguard it for the Center for Disease Control where, if need be, production of the vaccine would continue in the event that the terrorists would use a weaponized smallpox virus.

For months, it was all armed guards and crash barriers for Wyeth. There were guards stationed with the cache of vaccine at all times, a supply of vaccine that had been on ice since its production in 1984. When it came time to transport the vaccine off site, entire corridors were sealed off and only armed security were allowed to be present within those corridors during the transportation.

Overall, A-game had described the situation as “quickly became commonplace” as the armed guards and barbed wire and armed vehicles were part of Wyeth’s everyday life for more than a year.

In 2005, Wyeth had closed down the Marietta site and the property was taken up by Glaxo Smith Kline who, starting in 2006, continued various vaccine productions which go on to this very day. No large scale smallpox vaccines are currently in production in this country, however, and let’s hope that it can remain that way.

So there you have it. The quiet little river town of Marietta once again proves to have historical importance, not only on the national level but the world level, as well. All content within
this article was obtained either from Lyn Alarie’s “The Scoop on Marietta”, the 2002 issue of the “Remedium”, the yearly Wyeth newsletter celebrating the site’s 120th anniversary, the firstperson accounts of A-game, and the various online resources such as CDC’s website and, of course, some Wikipedia. All pictures provided were part of the Remedium 2002 newsletter. 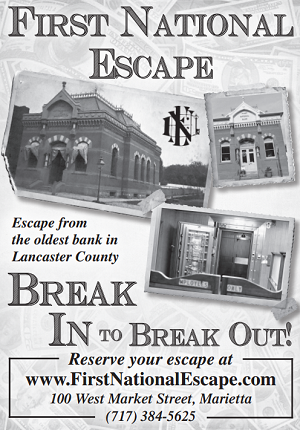