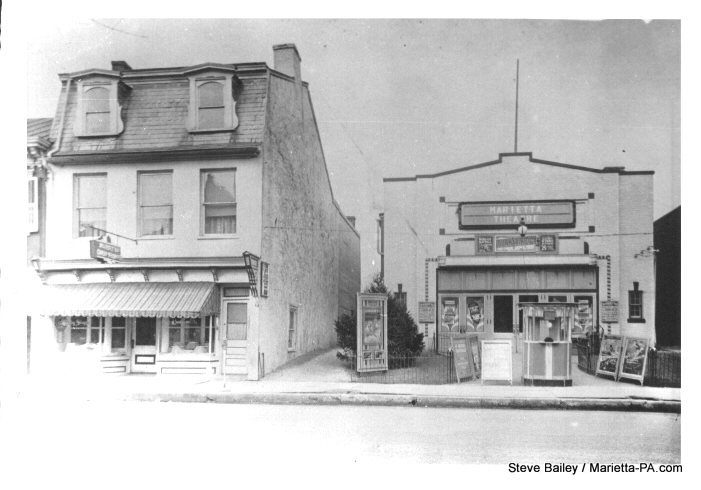 On March 3, 2016, the Susquehanna Stage Company (SSC), Marietta’s Community Theatre, took a huge step toward the future by preserving both our artistic Marietta roots and expanding our mission, vision, and goals.

We are happy to publicly announce the purchase of the downtown Marietta Theatre, located at 130 West Market Street. This Marietta landmark has been owned by the Marietta Restoration Associates since 2005. SSC is joining forces with the Lancaster County Housing and Redevelopment Authority to develop plans to preserve, restore, and renovate this beloved building as the new home of the Susquehanna Stage Company.

Built in 1914 by Italian immigrant Samuel Acri (1888-1971), this brick building was constructed expressly for the purpose of showing motion pictures. Acri originally rented the second story of Center Hall, where he began showing motion pictures in 1908. After a few years, the audience grew too large for the hall to accommodate. Acri purchased this property in May 1914 and built the movie theatre, which boasted 300 seats. In the beginning, a piano and a “photoplayer” provided music for the silent films. After “talkies” came out in the late 1920s, the theatre was converted to sound in 1929. It was called the Acri Theatre until sometime in the 1930s, when the name was changed to the Marietta Theatre.

In 1972, the theatre was purchased and restored by the K&C Partnership and they installed a Wurlitzer pipe organ for the showing of silent pictures. They also began showing current movies, but the changing movie industry and the marketing and distribution of first-run films made it difficult for singlescreen enterprises to flourish. In 1981, the theatre suffered a disastrous setback when it caught fire, resulting in $265,000 in damages. The theatre was again refurbished and began showing movies in 1987. When it closed for the third and final time in 1997 it was the oldest operating motion picture theatre in Pennsylvania and was one of the oldest in the U.S. Unfortunately, at this time the seats, organ, and other theatre furnishings have been removed (information gathered from “Candelight Tours of Marietta 1966 to 2015” by James C. Landis).

Our goal is to develop the Marietta Theatre into a multiuse venue by offering a consistent movie schedule, live stage performances by our community theater, and renting the space for concerts, recitals and lectures. This is an exciting time in the history of the Susquehanna Stage Company. It is our dream that re-opening the Marietta Theatre will help revitalize and energize our community, thereby encouraging other businesses and town leaders to bring commerce, visitors and new residents to savor the food, views, and culture of historic Marietta, Pennsylvania.

Initial and preliminary estimates for this project are three to four million dollars, and with a generous grant from the local Eater Foundation we have begun our work with the Lancaster County Housing and Redevelopment Authority. Our first working committee is headed by Matthew Homsher, along with Jim Landis, Mary Gildea, and Jim Johnson. As we venture further into this process of growth and expansion, the Susquehanna Stage Company will be reaching out to our community, supporters, and audience members for help in realizing our goals. Fundraising, grant writing, and marketing represent a very important and vital component of our success. These are the areas in which we need the most immediate help! As a non-profit 501c3 organization, our efforts are almost entirely voluntary. Can YOU help us? Do you have experience and ideas to raise funds, or marketing skills which would help to promote our theatre? Watch for more exciting details to come and the formation of a “Marietta Theatre” group to work solely toward the opening day and future of our new downtown location. Any additional inquiries, comments, or questions can be addressed to me or any board member by emailing me at jjohnson@susquehannastageco.com.

Thank you for your ongoing support of our efforts… “We’ve Got Magic to Do!”